The videos included in this playlist show instances of two-dimensional movement of autonomous vehicles operating on a lane-free road and are part of the examples discussed in the paper entitled "Lyapunov-based two-dimensional cruise control of autonomous vehicles on lane-free roads". In this work, the dynamics of each vehicle are described by the bicycle kinematic model, and each vehicle determines its control input based only on its own speed and on the distance from other (adjacent) vehicles and the boundary of the road. The goal of each vehicle is to achieve a fixed desired speed, while avoiding collisions. In particular, the proposed framework guarantees that vehicles do not collide with each other or with the boundary of the road; the speeds of all vehicles are always positive and remain below a given speed limit; and all vehicle speeds converge to a given longitudinal (desired) speed set-point. The simulation results also demonstrate the effect of “nudging”. Nudging is a virtual force that vehicles apply to the vehicles in front of them that increases the speed and acceleration of the nudged vehicle. In the videos, whenever a vehicle is “nudged”, its colour turns red. In addition, the inner ellipse around each vehicle describes a safety zone where no other vehicle can enter; and the outer ellipse around each vehicle denotes its sensing radius; specifically, each vehicle uses (distance) measurements from other vehicles within its sensing radius.

In this simulation scenario, 5 vehicles, starting from an initial state (position, orientation and speed), move to form a single platoon on the middle of the road with target speed 25 m/s. The vehicles remain within the road boundaries and do not collide with each other. 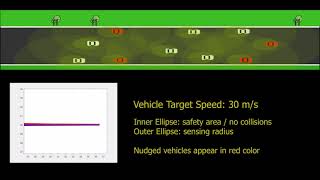 Vehicles forming a platoon on a lane-free road

In this simulation scenario, 10 vehicles operate on a lane-free road and converge to a strip in the middle of the road with target speed 30s m/s. 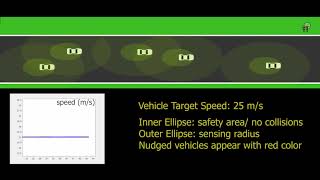