The video included in this playlist is a part of the results discussed in the paper titled "Automated vehicle driving on large lane-free roundabouts". In this work, a comprehensive strategy is proposed to control vehicles moving on large, complex, and lane-free roundabouts. Vehicle dynamics are taken into account by the bicycle model, which is also transformed in suitable coordinates for circular and skewed paths to facilitate the controller design. For each Origin-Destination, a corridor is computed offline in which vehicles are allowed to move. Within the corridor, each vehicle is navigated by a distributed nonlinear feedback control strategy which determines the control inputs i.e., acceleration and steering angle, based on its own variables, adjacent vehicles’ positions, and the desired orientation, which is calculated for every position in the corridor. Besides, the boundary controllers, designed based on linear state-feedback approaches, are employed to guarantee that the vehicle never violates the corresponding corridor and the roundabout boundaries. The famous roundabout of Place Charles de Gaulle in Paris, featuring a width of 38 m and comprising a dozen of entering/exiting radial streets, is considered as a striking example.

In this simulation, 40 vehicles, entering from various branches, are appropriately guided toward their destinations while they do not exceed the boundaries and collide with each other. Also, perpendicular motions and sudden path changing are avoided in all involved situations i.e., entering, navigating, and exiting. 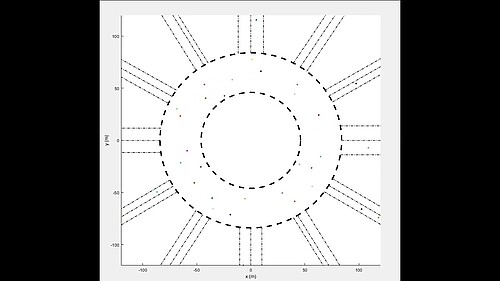